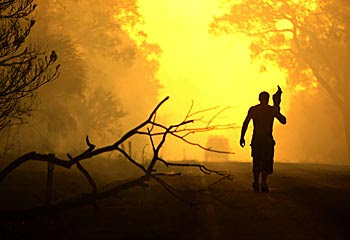 The NZ public have given generously of their time, effort and money to the Victorian Bushfire appeal, with as much as NZ$1m donated to the appeal so far;

The cataclysmic brush fires in the state of Victoria have claimed over 180 lives and left thousands homeless.

Today a team of 52 firefighters, crew leaders and incident management team members that have been drawn from a number of organisations and 4 victim recovery dogs left NZ to lend support and relief to their Australian counterparts.

Messages of support and condolence have flooded in to the NZ Herald's site from New Zealanders and have touched the hearts of many Australians, who take comfort from their kind words.

Its a time like this, of national grief and loss that a nation comes together and supports each other, and its also been wonderful to see two nations who are so close, yet so different in many ways, become as one in the face of adversity and in a time of great need.

The sense of a community has been phenominal in Australia and makes it the strong nation that it is and in which it citizens are so rightly proud.

It seems that everyone is doing their bit to support those affected by the fires - whether it be through fund raisers, physical assistance, taking in the homeless or donating goods. Even flood victims in North Queensland have been offering to donate their assistance cheques to the appeal.
from Lúthien on Friday, February 13, 2009 0 Thoughts about this post

NZ Eco-tourism Industry Damaged by 1080 Use

Following on from today's other article about the "Poisoning Paradise" documentary I thought it would be useful to see how the eco-tourism industry has been affected by the use of 1080 in NZ.

This article is a report from a recent Eco-tourism New Zealand conference near Greymouth.
Source: Stuff

New Zealand's eco-tourism industry is trying to establish its green credentials internationally but the effort is being put at risk by the aerial distribution of 1080 poison, an industry pioneer has warned.

The Eco-tourism New Zealand conference near Greymouth has been told that internationally recognised national credentials such as Qualmark Green, announced in May, are helping attract international tourists.

However, Kea Heritage Tours managing director Matt Lysaght says that is being damaged by the controversial use of 1080, which threatens New Zealand's clean-and-green reputation in key markets.

"At the end of the day, if word (of aerial 1080 distribution) becomes common talk amongst our clients in North America and Europe ... I think my concession would be worth next to nothing if I don't get any visitors."

Lysaght, who sits on Te Tai Poutini Polytechnic's eco-tourism programme advisory board, also called on the Department of Conservation (DOC) to prosecute tourism operators who worked in the conservation estate without a concession.

"If we're going to protect 100 per cent Pure New Zealand, then eco-tourism is the only apparent option for each and every tourism operator.

"If each and every tourism operator doesn't embrace these values, then we won't deliver 100 per cent Pure New Zealand."

from Lúthien on Tuesday, February 10, 2009 0 Thoughts about this post 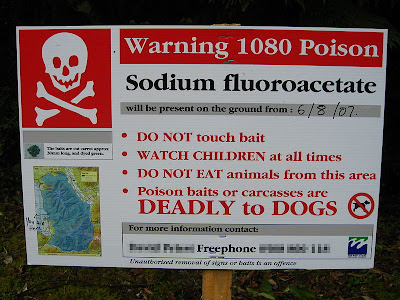 Makers of a new documentary have provided incontrovertible evidence that the continued widespread use of highly toxic Sodium fluoroacetate (1080) is having a devastating effect on New Zealand's fauna.

The film's shocking revelations about the effects of 1080 are in stark contrast to the Clean, Green, 100% Pure image that NZ tries to present to the world. The reality about some parts of NZ's environment couldn't be further from the truth.

New Zealand is the world's largest user of 1080.

The Graff boys' blog may be found here: thegrafboys.blogspot.com

"New Zealand's long-term use of 1080 is poisoning forest ecosystems and could drive birds and insect populations to extinction, a new documentary says.....

About 300 people packed Hokitika's Regent Theatre on Friday night for the premiere of Poisoning Paradise -- Ecocide in New Zealand.

Hamilton-based film-makers Clyde and Steve Graf said it was a tragedy the documentary had to be made.

Largely shot in bush areas after aerial 1080 drops, the documentary "goes behind the wall of the forest and shows people the other side of the story", Clyde Graf said.

It shows falcons and other birds dying, freshwater crayfish fighting over submerged 1080 pellets, deer and pigs rotting in creeks, eels eating dead animals in waterways, dead and dying stock, and weka and bush robins picking at 1080 carcasses and baits.

Scientists, university lecturers, doctors, hunters and farmers highlight their concerns about the impact of 1080 on wildlife populations, the forest ecosystem and human health.

The Graf brothers worked on the film for eight months after seeing a weka picking at a 1080 carcass in Kahurangi National Park.

"We are asking people who care about New Zealand to sit through this to get the full picture about 1080 before they make up their minds," Clyde Graf said.

Renowned aviator Sir Tim Wallis thanked the Graf brothers for their work after attending the premiere.

"What we have seen tonight is what is really happening. Thankfully, they have recorded it all, because otherwise it will remain a secret," he said.

"I have concerns about the secondary poisoning of species, particularly after seeing freshwater crayfish fighting over 1080 baits. DOC will probably not be too happy about it, because it undermines what they do," Lash said.

However, the film was one side of the 1080 argument. Farmers struggling with bovine tuberculosis would go backwards if the aerial 1080 programme was removed, she said.

Lash said she would report to the Animal Health Board (AHB) this week on the documentary and would recommend the board view it.

"There is no point for any group to put their heads in the sand over this. We all have to sit down, look at the information and start working our way through it."

"They have reported that the movie raised no fresh claims or evidence. Basically, the Environmental Risk Management Authority has approved 1080 for use; it is safe to use and DOC is going to use it."

The use of 1080 in New Zealand as a pesticide is a contentious issue, with the majority of the debate occurring between conservationists and hunters. Concerns are also raised about security of potable water supplies in areas where 1080 is applied.

Worldwide, New Zealand is the largest user of 1080 (sodium fluoroacetate). 1080 is a commonly used pesticide since it is very effective on mammals and New Zealand has no native land mammals apart from two species of bat. The first trials were carried out in New Zealand in 1954, and by 1957 its use had become widespread. 1080 baits are used through ground based and aerial application to control possums (an animal pest introduced from Australia) and other introduced mammalian pests.[1]

New Zealand's unique fauna and flora are endangered by the rapid spread of possums, stoats and rats.[2] Also, the possum is a vector for tuberculosis so possum numbers are controlled to prevent its spread amongst cattle and deer herds. As the possum is from the eastern states of Australia and is a mainly arboreal forager, it has never developed a resistance to sodium fluoroacetate.[citation needed]

While the Department of Conservation and the Animal Health Board [3] favour the effectiveness of aerial 1080 application,[4] critics of the application of 1080 claim: “agencies increasingly use large scale aerial applications to cut costs".[citation needed] Opposition from hunting groups and threats by other opponents have made local agencies responsible for the use of the poison hire guards to protect their staff.[5] Forest and Bird, the largest conservation organisation in New Zealand, advocate the use of 1080 for controlling all mammalian pests.[6]

from Lúthien on Tuesday, February 10, 2009 0 Thoughts about this post

Attempted Abductions in Wellington and a Brothel Hold-Up

"Police are worried a man who tried to force a 20-year-old woman into his car late at night in Wellington could strike again.

Police are seeking help to identify the short, fat, balding Asian or Middle Eastern man who approached the woman as she walked home from a trip to her local service station in Newtown about 11.30pm on Friday.

Detective Paul Baskett told NZPA the man, who was dressed in a white T-shirt and jeans, pulled up alongside the woman and asked if she would like to get into his white four-door car.

When she refused he pulled his car across a driveway in front of her, got out and tried to wrestle her into the vehicle.

But the woman "made a lot of noise" and the man fled when two people called out from across the other side of the road.

Mr Baskett said the man's attempt to abduct the woman had worrying "sexual overtones" and police were concerned he could strike again.

Police wanted to hear from anyone who could help them identify the man, including the couple on the other side of the road who intervened.

He said the woman estimated him to be about 1.65m tall. His balding hair was closely shaved and he spoke with an accent.

The incident happened on Adelaide Rd."

The abduction attempt bears remarkable similarities with other attacks.

One occurred 2 kms. away in the city in September of last year.

In that incident a 19 year old woman fought off an attacker who tried to drag her into his light coloured, four door car on Cambridge Terrace, near the Woburn Railway Station carpark.

She described him as being "about 173cm tall with dark skin and the appearance of an Indian or Somalian. He was wearing a dark-coloured parka type jacket with the hood up."

See this link to Google maps that shows the locations of the two attacks: LINK

In August 2005 there was an abduction attempt on a 13 year old girl in the Newton/Melrose area involving a white, 4 door car.

The attacker, who came from the direction of Melrose, was described as "tall, dark skinned, big build and possibly with facial stubble. He was wearing a bulky black hoody, and possibly dark coloured pants. "

The incident occurred at the junction of Mt Albert Road and Lavaud Street which is not far from Adelaide Street.

Also in the news from Wellington this morning was an armed robbery at the brothel "Il Bordello" which occurred at last night. The robber, who used a sawn off rifle, escaped with a large amount of cash.

The female receptionist, who had tried to escape during the robbery but was dragged back, is still in shock after the traumatic incident.

from Lúthien on Monday, February 09, 2009 0 Thoughts about this post