"The Dutch Government is warning tourists travelling to New Zealand of "serious crime" after a second Dutch tourist was raped in the space of two years.

The 22-year-old woman was attacked early last Thursday as she and her 25-year-old partner slept in their station wagon at the Five Mountains Holiday Park in Tuatapere, west of Invercargill.

Police have arrested a 25 year-old man in relation to the attack.

A new heading - "Serious Crime" has now been added to the New Zealand travel advice page on the Dutch Government website.

Translated, the page says although serious crime does not happen often, the number of robberies is increasing and campers are being targeted.

The Dutch travel advice warns campers to use official camping sites and not to park up in the "wild".

The site mentions the rape of the Dutch woman last week as well as an attack in 2006."

This blog has been covering violent crime against tourists of varying nationalities in NZ and raising concernover the escalation in the frequency of the attacks, especially on back packers and campers link link

from Lúthien on Friday, January 23, 2009 0 Thoughts about this post

Links to this post
Labels: back packing, Campsite assaults, Crime, Dutch tourists, NZ not as safe as you think, Rape, Sex attacks, tourism

Source: NZ Herald
A vehicle was stolen in West Auckland earlier today and used in a handbag snatch that went fatally wrong.

Following a high speed pursuit on Auckland's North Western Motorway involving the Armed
Offenders Squad a member of the public was was shot dead and another injured. At this time it is not known who fired the fatal shot.

20 police vehicles and a helicopter were involved in the chase which started at 1pm following a handbag theft in Titirangi.

A man has been arrested and a sawn off .22 rifle was found at the scene.

Back in Sept 2008 this blog highlighted the problem of bag snatches in the Auckland area. Link - Bag snatchers targeting women again

The Waitemata police carried out a series of raids on the homes of an Auckland-wide gang that was stealing handbags from the front seats of cars while women loaded their groceries into the boot.

At the time 9 men were arrested but police admitted that it hadn't stopped thieves from stealing women's bags and the spate of thefts continued in the New Lynn Area (close to Titirangi) all of which involved the use of stolen cars to make a getaway. 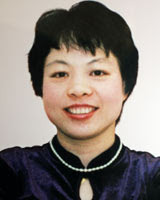 In June of last year 39 year old Joanne Wang (right) was killed when she was run down down in the street after her handbag was snatched at the Manukau Westfield shopping centre, her 8 year old son was with her and was traumatised after witnessing the appalling incident. News link


47 Bag Snatches over the Christmas period

Then in December police released released video footage of another dramatic handbag theft in South Auckland, showing a woman being dragged along the ground by her attacker. Over the Christmas period there were 47 bag snatches in the area. Link TVNZ

Police have said that it's becoming a big problem in the area and the criminals are targeting Asians.

These incidents suggest that the rule of law is failing in Auckland and the problem is beyond the the control of the police. It belies the commonly held perception that New Zealand safe place in which to live.

Links to this post
Labels: Auckland, Crime, Crimes against Asians, Handbag snatches, Joanne Wang, NZ not as safe as you think, South Auckland, Violence against women

Dunedin police have arrested a man for the alleged sexual assault of a woman at the Leviathan Hotel last night.

The man, aged 50, was found near to the hotel as police set up a cordon and spoke to the occupants at around 8:50 pm.

The hotel offers cheap accommodation and is often used by back packers and trampers. Reviews on Tripadvisor.com are mixed and the hotel is described as being like a rabbit warren, situated on a very busy road and with a car park filled with huge juggernauts. Questions are bound to be raised about security at the hotel and access by non residents.

At this stage the nationality of the victim has not been released and police have stated that the incident is not linked to two other rapes which occurred in the town over the weekend.

This blog has previously highlighted assaults on back packers and campers in NZ and the growing frequency of this type of attack in New Zealand : link

Update:
The alleged attacker was later named as 54 year old William Daniel Stewart who was staying at the hotel. Stewart is of dual nationality and holds a Canadian passport.
from Lúthien on Wednesday, January 21, 2009 0 Thoughts about this post

A while ago I wrote about the shocking water quality at some of New Zealand's most popular swimming places - a third of them were found to be so polluted that the Ministry for the Environment advised people to stay out of the water. Advice that was in stark contrast to NZ's '100% Pure' image. Some of the locations (Ocean Beach stream in Northland and Kawakawa Bay south of Auckland) were so polluted that the Ministry said the councils should have permanent "no swimming signs".

Beaches in both the North and South Islands made the news again today.

A mass failure of household septic tank systems has put over 2000 residents and a million visitors at risk at Rodney District Council's Muriwai beach, site of a world famous gannet colony.

In Dunedin St Kilda, St Clair and Middle beaches were closed on Sunday due to increased levels of harmful bacteria from the discharge outfall at Lawyer's Head. Fortunately this should be rectified later this week when a new $34 million waste discharge pipe comes on line and pushes treated sewage a kilometre out to sea.

However, no similar solution is proposed for Muriwai where the provision of a municipal waste water treatment plant would cost an estimated $9 million and take six years to complete.

Rodney DC have said that Muriwai has been rejected for a Government sanitary works subsidy scheme because it "rated low in the deprivation index."

from Lúthien on Tuesday, January 20, 2009 0 Thoughts about this post

"A Chilean tourist suffered cuts and grazes after being dragged about 100 metres behind a car in Nelson yesterday.

The incident happened when two men tried to drive off with the tourist's belongings.

Police said the two men had offered the 23-year-old man a ride to a backpacker hostel.

But he felt uncomfortable about the situation and asked to be let out of the car.

Acting Sergeant Terry Holland said that while the man was lifting his pack out of the boot, the driver drove off and he was pulled along the road as he hung onto his belongings.

The tourist managed to haul his bag out of the car, but suffered cuts and grazes to his shoulder and legs. He was recovering in Nelson today."

Other back packing crimes in NZ
from Lúthien on Monday, January 19, 2009 0 Thoughts about this post

Links to this post
Labels: back packing, Nelson, NZ not as safe as you think, tourism

Police are hunting for a sex attacker who assaulted an Australian tourist walking along a roadside in Nelson, South Island.

The woman had been in NZ with a tour group and had decided to walk from Tahunanui to central Nelson to buy souvenirs when the man dragged her into undergrowth near Auckland Point school.

Her screams were heard by the occupants of a passing car who came to her aid and chased the offender who has yet to be found by police. He was described as having light olive skin, and being about 180cm tall and of medium build, in his early 40s, with greying hair, stubble, bad body and breath odour.

Police have released a CCTV video of the alleged attacker:

The assault comes days after the rape and robbery of a young Dutch backpacking couple at a campsite in South Island and is part of a rising trend of violent crime in NZ.

Also in the news was the arrest of three men for the gang rape of a woman in Matamata last Friday, her nationality is not known at this stage.

On the same day residents of the small town were incensed when a 16 year old youth, out on bail for aggravated robbery despite police objections, raped a 15 year old girl within hours of his release.

NZ First MP Ron Mark commented "When is the Youth Court going to take victims into account instead of worrying about the sensibilities of vicious young mongrels?

To bail him to his home, where his family obviously doesn't give a damn and from where he already absconded at the weekend to allegedly commit rape, borders on the insane."

Matamata-Piako District Mayor Hugh Vercoe said the bail -rape issue was "extremely frustrating, Matamata is a good little town, it does not have a lot of crime and is a very tight-knit sort of place."

Perhaps he would like to reconsider that statement in the light of recent events.

from Lúthien on Monday, January 19, 2009 0 Thoughts about this post

Links to this post
Labels: Crime, Matamata, Nelson, NZ not as safe as you think, Rape, Sex attacks, Tahunanui, tourism, Tourist attacks, Violence against women, Violence on the Streets

In what is getting to be a rather common occurrence in New Zealand another tourist has been sexually assaulted at a campsite in the country.

A 22 year old Dutch visitor was raped and her partner robbed at knife point whilst sleeping in their car at the Five Mountains Holiday Park in Tuatapere, west of Invercargill, South Island.

A 25-year-old man has been arrested.

Campground owners Zane and Tina Barrett said they were "absolutely devastated" by the attack and would close at the end of March.

The attacker, who is said to be known to Mr and Mrs Barrett,was reported by his mother when she recognised a tea towel and filleting knife used in the attack and shown in news reports.

25 year old Maakiti Joseph Tipene was later sentenced to 10 years prison with a minimum of 7 years non parole for rape, three charges of sexual violation, two of unlawful detention, two of threatening to kill and one charge of burglary.

Tipene was something of a 'career criminal'.

According to the Sensible Sentencing Trust's offender database he

"Unlawfully detained and threatened to kill a Dutch couple in Tuatapere, Southland in January 2009, and repeated sexual violation and rape of the woman

Ten years would seem to be a very lenient sentence under the circumstances, this man could be released back into the community to continue where he left off when he is just 32.

Violent and sexual assaults on visitors to NZ are occurring far more frequently in recent years, this blog has reported some of the cases please see link: violence against tourists

Visitors to the country are well advised to exercise every precaution to safeguard their personal safety, as they would do in any other international location, and not be lulled into a false sense of security by accepting assurances that NZ is a "safe country" with low rates of crime.

The exact opposite is true - NZ has one of the highest reported crime rates in the world, see link: World Crime Rates

Violent crime on the increase

from Lúthien on Monday, January 19, 2009 0 Thoughts about this post